A glider box can offer a safe refuge for gliders in urban and rural environments.

Several species of gliders may be found in urban environments across eastern Australia,  two of the more common species are the Sugar and the Squirrel Glider.  The Squirrel Glider is found in drier forests and woodlands from south-east South Australia up the east coast to northern Queensland.

Squirrel Gliders live in small family groups of up to 10 individuals.  They are obligate hollow users – in that every day they require a safe refuge to retreat to, typically a natural hollow  or where hollows are lacking nesting boxes.

Significant alteration to many urban and rural environments has meant that natural hollows are now rare.  Supplementing natural hollows with a glider nesting box will increase available habitat and is likely to ensure the potential for conflict is minimal.

This glider nesting box provides an ideal alternative to a natural hollow for  Squirrel Gliders, where such resources are lacking. 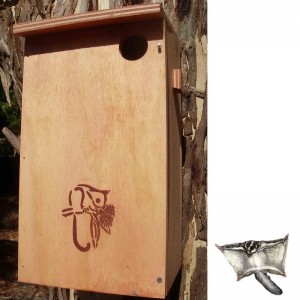