How to Get Rid Of Spiders

1. Identify all the spiders in your home or garden and kill only the poisonous ones.
2. Treat webs or nests with a regsitered insecticide.
3. It is recommended to leave webs in place for a few days after treatment before removing with a broom.
4. Spot treat any dangerous / venomous spiders with a crawling insect spray. 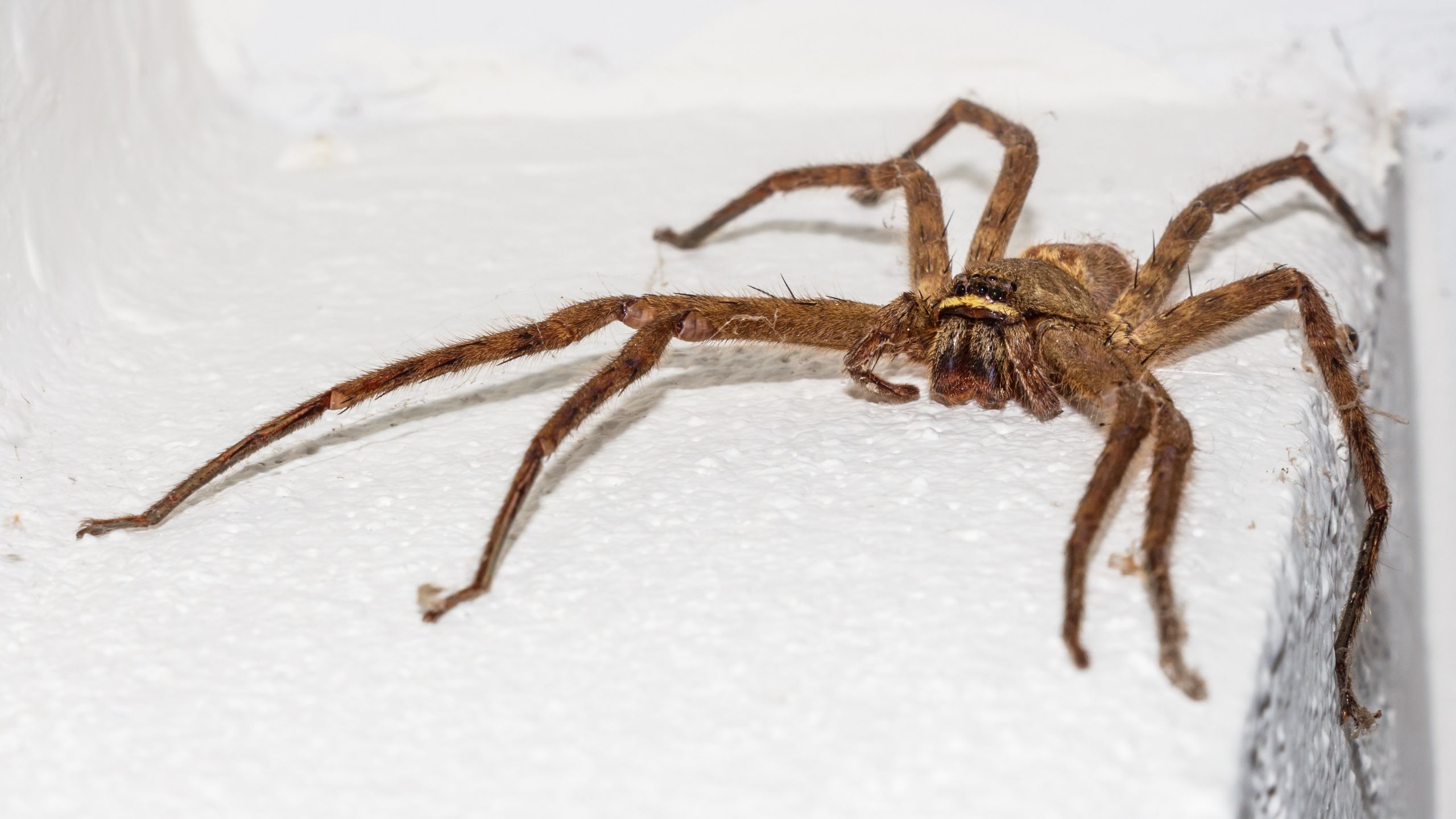 In most homes you will find a spider, but unfortunately their presence is not welcomed and ends in their death. Even when they are located in the garden, their role in pest control of plants is not realised by many homeowners. Spiders play a very important role in our environment by controlling pests that they prey on and should be regarded with respect.

Spiders differ from insects in that they have eight legs, their head and thorax is combined to form a ‘cephalothorax’, and there is a constriction between the cephalothorax and abdomen. They have a pair of ‘palps’ in the front which can be mistaken for a pair of legs, these are sensory and the males use them for mating. The male is smaller in size than the female, has longer legs, larger terminal area on the palps and a smaller abdomen. Spider usually have three to four pairs of single cell eyes, which is used in their identification.

The female spider produces an egg sac in which the eggs are laid. The eggs inside the sac hatch so when it is opened for inspection a large number of live spiderlings are present. Once the spiderlings emerge from the sac their growth involves several moults of their outside skin until they reach adulthood. Most spiders have completed development in one year however some ground dwelling spiders may take a few years.

Spiders are mostly nocturnal, leaving their burrows or shelters in search for food at night. Webs of the web spinning spiders are made through the night to catch their prey. Spiders squeeze their prey with their fangs and the fluids are taken in through their tiny mouths. They feed on insects and other small arthropods, but cannibalism also occurs, especially after mating when the female consumes the body fluids of the male.

Spiders produce silk or web from structures known as spinnerets on the rear end of their abdomen. This silk in important especially to orb-weaving spiders which they rely on their webs to trap insects. Ground dwelling spiders lay silk on the ground near their burrows to trap insects and other small animals.
While the venom of the funnelweb and redback spiders can cause the death of humans, most other spider bites cause only minor irritation and swelling. It is extremely important that if someone has been bitten by a spider that identification be obtained.

Ground dwelling spiders make holes in the ground and live there with silken web material. Some of these spiders are regarded as poisonous, in particular the Sydney and northern rivers funnelweb spiders are very poisonous.

SYDNEY FUNNELWEB
This spider is often found in most suburbs of Sydney and along coastal New South Wales. It is black with fine reddish hairs and favours dark places to make its tunnel. Males are about 20mm long where the female is larger at 30mm. They have a long life cycle of about three to five years, with some females living even longer. The make is identified by having a spur on the second pair of legs. The male is more toxic than the female and are more active late summer and autumn when seeking a mate.

NORTHERN RIVERS FUNNELWEB SPIDER
This is another poisonous spider which can be found in holes in trees along the north coast of New South Wales. They are black with reddish hairs. Males measure 35mm while the female is much larger at 50mm. They have a life cycle of three to five years.

SYDNEY BROWN TRAPDOOR SPIDER
These spiders are often found around Sydney although the hole in the ground in which it lives may not have the ‘trapdoor’ cover like some other trapdoor spider species. The Sydney brown trapdoor is not poisonous to humans. Both the male and female are brown to dark brown and hairy. Males can be identified by its boxing glove-like palp and two spines on the inner surface of the front legs. The length of the male is usually 20mm while the female is 25mm.

MOUSE SPIDERS
Mouse spiders can be found in most parts of Australia. They are not an aggressive spider and the female lives in a hole in the ground, often with a door over the entrance. Both sexes are black, but in one species the head of the male is red. Males have longer legs than females. The eastern mouse spider is often found in and around swimming pools and may be mistaken for the Sydney funnelweb. The male is 15mm in length while the female is 20mm.

WOLF SPIDERS
Wolf spiders can be found around most of New South Wales and in other states. They live in holes in the ground and are mottled grey in colour. The cephalothorax is usually referred to as ‘Union Jack’ in appearance. As in other spiders the male has longer legs than the female. Their bite can be painful and considered toxic. The male measures 15mm in length and the female 20mm.

The spiders which construct webs produce two types of silk. One is for the main part of the web which is for catching or snaring flying insects, and it is of sticky or adhesive material. The other type forms the ropes which are attached to structures and a like, and it is of a non-adhesive material. An ‘orb’ web consists of tiny threads radiating from a central point supporting a spiral of sticky web used to catch the flying insects. Both the central sticky area and dry silk need replacing after one night. After squeezing the body fluids from their catch the spider wraps the body in silk and leaves it hanging in the web. All orb-weaving spiders are non-poisonous to humans, and not aggressive. They have one generation a year.

GARDEN ORBWEAVING SPIDERS
This spider is dark to light brown in colour and hairy. It hides in plant foliage during the day and constructs its web at night usually in shrubs, trees and across pathways. It is not aggressive, rarely bites and is non-toxic. Males are 10mm in length while the female is 25mm.

ST ANDREWS CROSS SPIDER
This spider has a brown cephalothorax with a yellow and brown striped body. It hangs in its web in a cross like position. It is not aggressive and is non-toxic. Males are 5mm in length and the female is 12mm.

LEAFCURLING SPIDER
This spider is brown in colour with yellow markings, which resides in a curled leaf or paper at the centre of its orb web. It likes to suspend its catch along paths insect trails in open bush. They also favour spots near paling fences in suburban gardens. They have a small cephalothorax and a large body. The males are around 4mm in length and the female is 7mm.

TWO-SPINED SPIDER
This spider has a brown and cream body with reddish legs. It produces an egg sac larger than its body and has two dorsal spines on its abdomen. They can often be found hanging in its web among trees and shrubs within a couple of metres from the ground. This spider is harmless.  The male is 3mm in length and the female 7mm.

GOLDEN ORBWEAVERS
This spider has a yellow and purple body and is rather velvety with fine hairs. It hangs in strong strands of web which often have a golden sheen in the sunlight. They are not aggressive and non-toxic. The male is 5mm in length and the female is 30mm.

REDBACK SPIDER
The female redback spider is extremely poisonous. It has a black velvety body with a red stripe on the upper surface of the abdomen. They make loose untidy webs among leaves, rubbish, under houses, in tins, tyres, stacked items and outside toilets. The male spider is quite small around 3mm in length and harmless. The female can measure up to 12mm in length.

BLACK HOUSE SPIDER
These are poisonous spiders whose bite can cause pain, nausea and sweating but is not lethal. They are dark brown in colour and can and can be found in the bark of trees. They help to control flies and mosquitoes around the house but their webs are unsightly. They like to sit in the middle of their webs which are often made on window sill, under guttering or around toilets. The male is 8mm in length and the female is 12-18mm.

WHITETAILED SPIDER
This is another poisonous spider whose bite can cause pain and have been linked with blistering and necrosis (where the cells on and just below the surface die and become scaly). They are black with a white patch at the end of its abdomen. The male is 12mm in length while the female can be up to 20mm. This spider is a wanderer and a hunter. It mainly feeds on other spiders, including the black house spider. They are commonly found under bark and logs in the bush. When it lives in houses it searches for its prey in the early evening and shelters in the day in bathrooms, top of walls and in furniture.

HUNTSMAN SPIDER
The huntsman spider is not aggressive, but if provoked its bite can be painful although no symptoms of poisoning follow. Tis front two legs are larger than the rear two and its body is rather flattened in appearance. They also vary in colour from brown to grey and buff and it is often mottled. The huntsman can move sideways. Huntsman normally live under bark during the daytime and emerge at night. They enter houses where they are often seen on walls and a quite handy to have around as they feed on insects. The male is 25mm in length and the female 35mm.

NETCASTING SPIDERS
These spiders are non-toxic which hold their nets between their front legs for catching insects. Netcasting spiders look like small sticks and have long legs. They are brown often mottled in colour. The male is 8mm in length and the female 15mm, however these sizes are variable with different species.

JUMPING SPIDERS
Jumping spiders are the only spider that can jump from a flat surface. They are non –poisonous and seek food during the day. Their front legs are very large and strong. The male is 6mm in length and the female 8mm.

SPIDER ANGLERS
These spiders are non-toxic and make their webs on leaves. They produce a thread which is sticky to help catch insects. They are cream in colour and the male is 3mm in length while the female is 12mm.

1. Identify all the spiders in your home and kill only the poisonous ones.
2. When using insecticides in the garden, take care, as this can cause funnelweb spiders to enter your house. Wet weather may also cause ground dwellers to enter houses; they are also often found in and around swimming pools and could still be alive even after hours at the bottom. Do not remove these spiders with your hands.
3. Carefully shake all footwear and clothing which have been left outdoors before dressing, especially in summer and autumn.
4. Carefully inspect all toys, clothing, footwear and other articles left outside over night before using or bring them inside.
5. Vacuum any webs from under eaves and around windows and release any harmless spiders back to their natural environment.