How to Get Rid Of Mosquitoes

How to get rid of mosquitoes around your home or commercial premises:

1. The most effective way to get rid of mosquitoes is to reduce the number of breeding sites. This can be anywhere or anything that holds stagnant water such as pools, dams, swamps, fish ponds, blocked gutters, pot plants, etc.
2. Installation of door and window insect screens can help keep mosquitoes from entering a home or commercial premises.
3. Chemical application to surface areas where mosquitoes rest or harbour.
4. Install electric mosquito traps or bug zappers
5. Citronella candles, sandalwood sticks, mosquito coils, citronella oil burners, etc are all effective deterrents for mosquitoes.
6. Insect repellents applied to skin and clothing can help prevent mosquitoes from biting.

Mosquitoes are not only blood suckers from humans and animals but are also responsible for the transmission of certain diseases, of which some of them can be fatal. 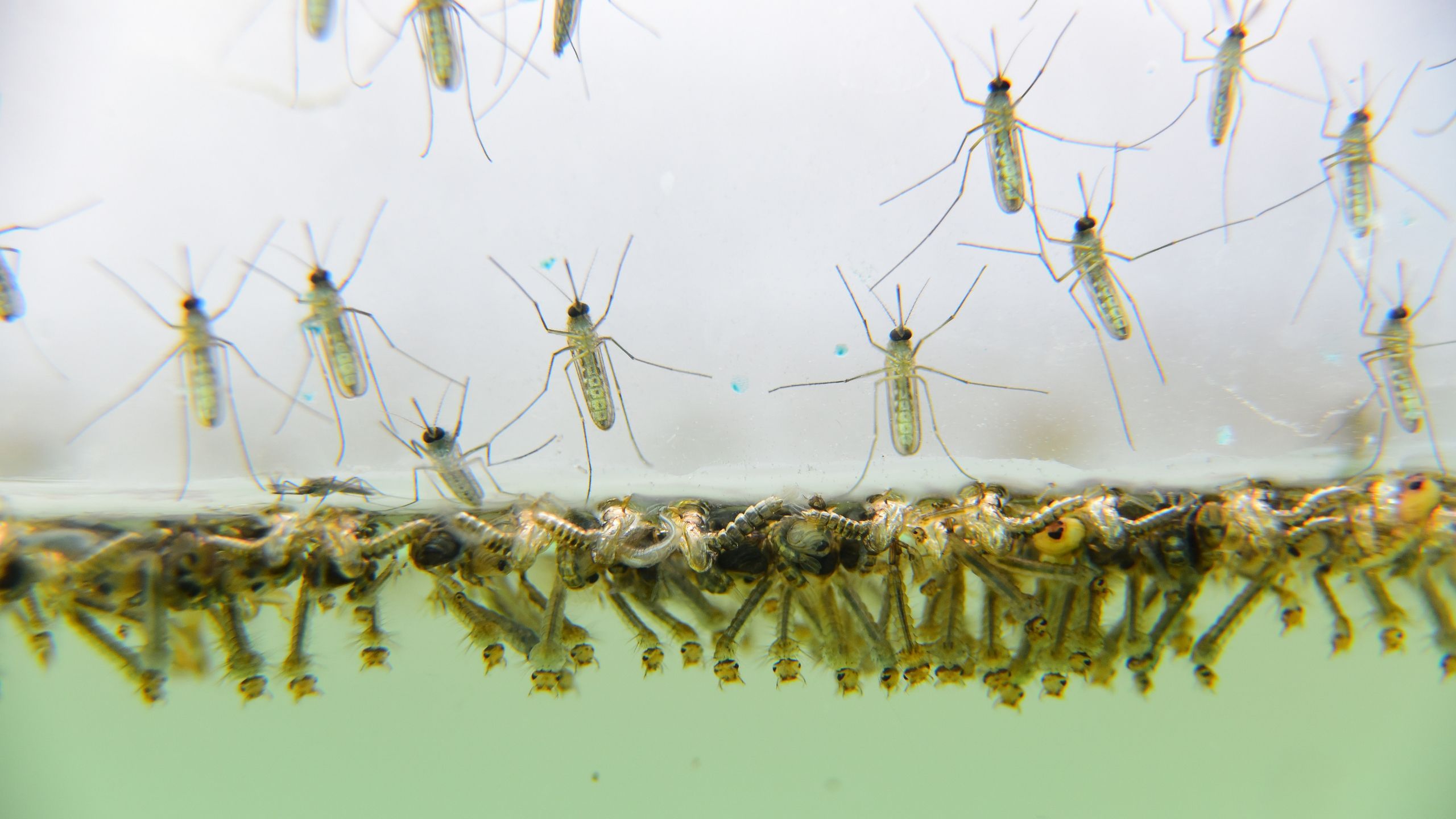 Mosquitoes have piercing and sucking mouthparts. They are attracted to their hosts once they detect warmth, moisture from the body and carbon dioxide being breathed out. Sweat on human bodies may also be an attractant.

Female mosquitoes are the blood suckers. Irritation usually arises when the female injects saliva into the skin to serve as an anticoagulant to keep the blood flowing. The female requires a blood meal before she can lay eggs, which are placed on the surface of water. These then hatch into aquatic larvae or ‘wrigglers’ which feed on minute organic particles in the water. When fully grown they pupate into mobile pupae known as ‘tumblers’. The adult mosquito that hatches from the pupa has long leg and one pair of wings. The male mosquito is not a blood sucker; however they feed on plant secretions. The life cycle of a mosquito can be completed within a week, but is usually longer. During that time mosquitoes can spread over several kilometres.

Millions of lives are lost annually throughout the world by diseases transmitted by the female mosquito.  There are several types of diseases which are transmitted:

CONTROL METHODS TO GET RID OF MOSQUITOES 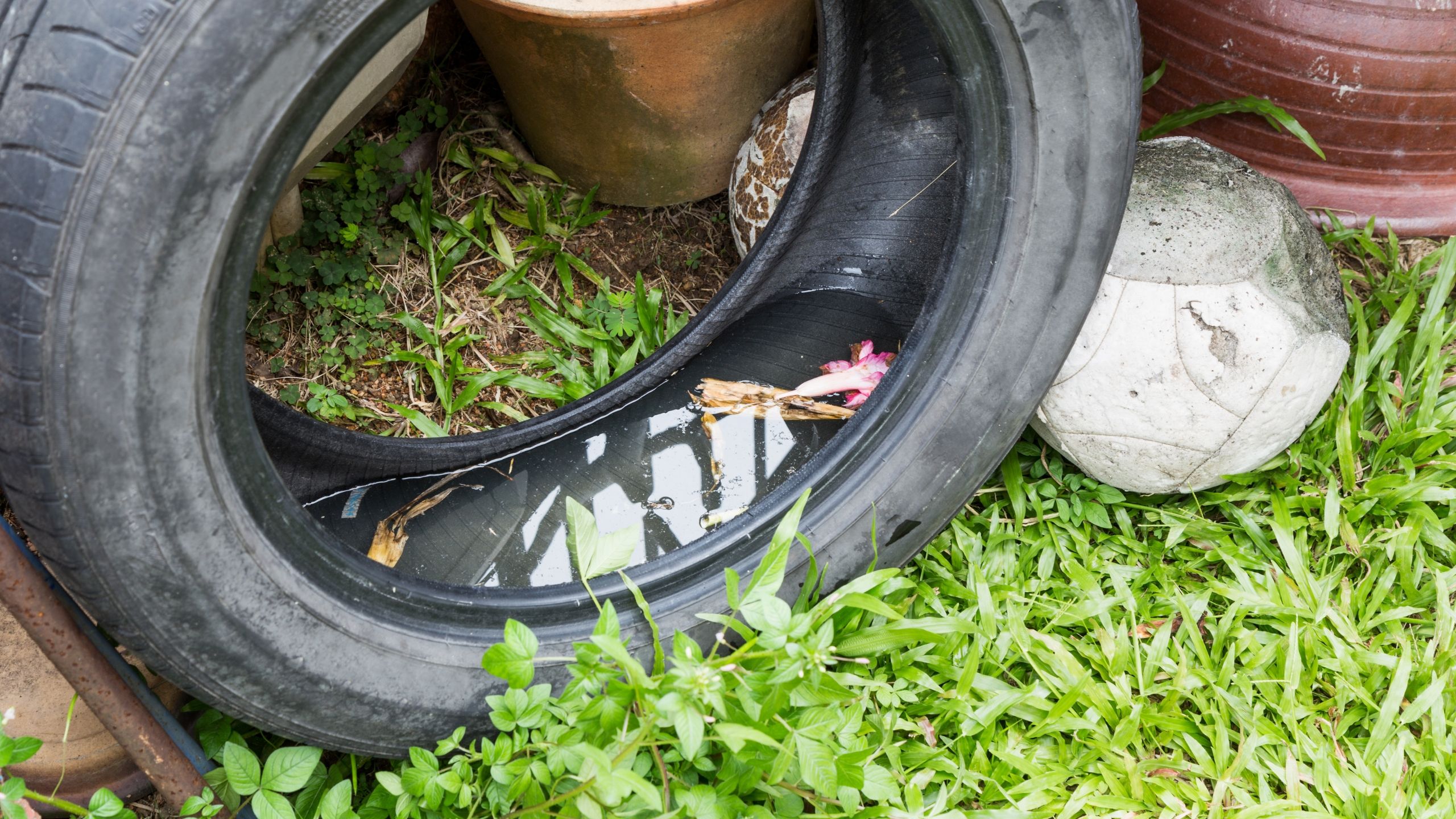 Non-chemical methods can significantly reduce populations, mainly by the elimination of breeding sites, which can be anywhere water is held such as swimming pools, swamps, dams, rock pools and anything which can hold water for some time. Guttering around a roof that holds old water is a major breeding ground for mosquitoes. Door and window screens affect the entry of mosquitoes into houses, but do not reduce the numbers.

One of the most effective ways to reduce mosquito numbers is by elimination of breeding sites. This can be anywhere water is held such as unmaintained swimming pools, swamps, dams, rock pools, car tyres and anything which can hold water for some time. Blocked guttering around a roof that holds old water is a major breeding ground for mosquitoes.

Mosquito traps are an effective non-chemical method of reducing the breeding population of mosquitoes in an area. Mosquitoes even in the dark, can easily assess where a person is by sensing carbon dioxide and temperature that he/she emits. Also, they react extremely sensitively to near ultraviolet rays. Using these behaviours of mosquitoes, Mosquito Traps can attract and capture mosquitoes. These devices attract mosquitoes, suck them in with a fan and deposit them in a holding cage to dehydrate.

Mosquito zappers, otherwise known as mozzie zappers or bug zappers, are devices which attract mosquitoes and other flying insects with ultraviolet light. Inside the bug zapper is an electrical grid which electrocutes the mosquito upon contact. The mosquitoes then fall into a catch tray in the base of the device. These types of mosquito zappers have been around for decades and are used in domestic yards, patios, outdoor dining and entertaining areas as well as in commercial situations. 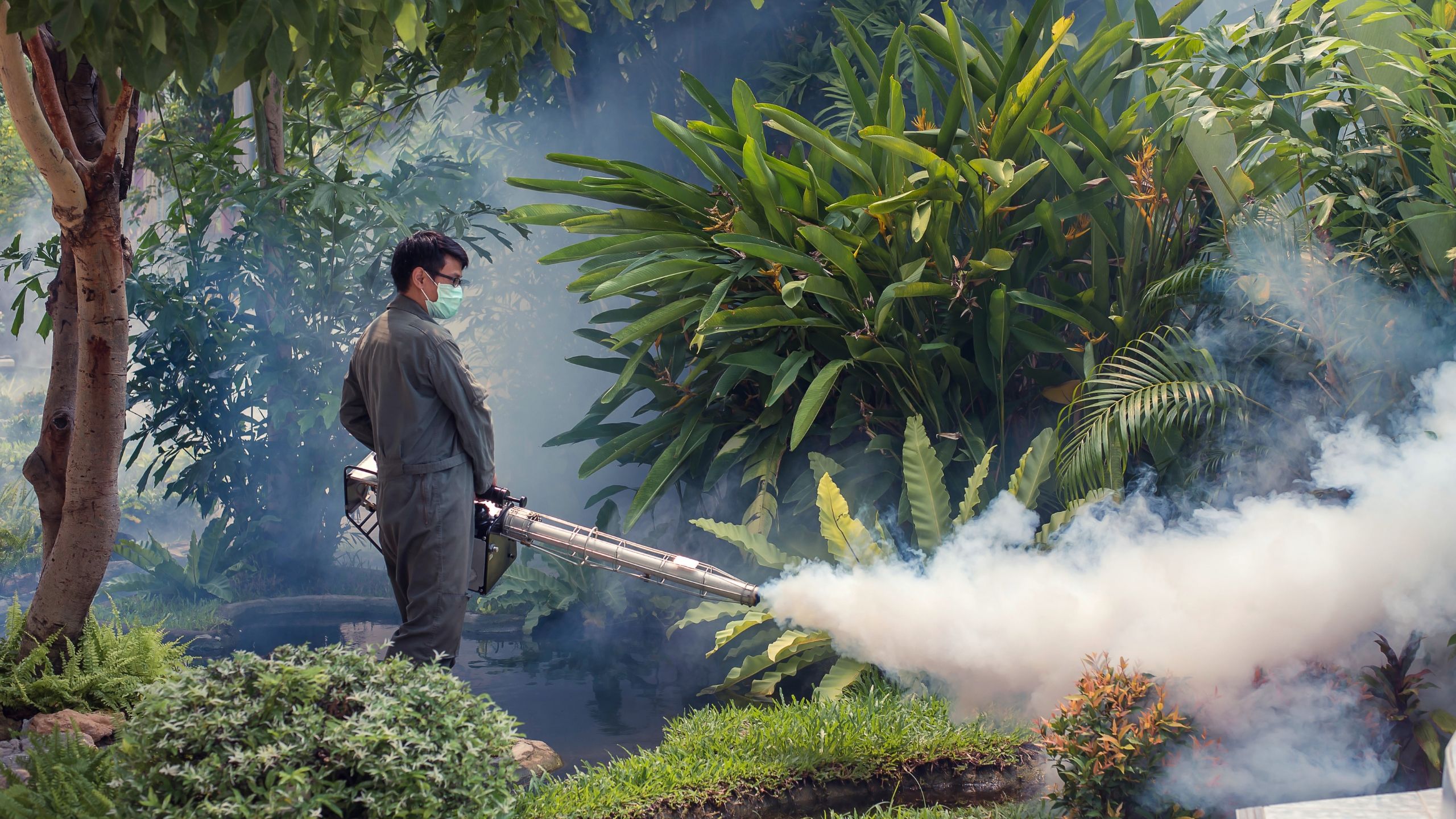 Chemical methods used against the adults and larvae will decrease numbers; however the treatment of larvae will have a greater impact on reducing the mosquito population. Treatment of larvae is often done by applying a thin film of oil on the surface of the water. The oil blocks the breathing tubes of the larvae and pupae.

Foggers are commonly used for control of adult mosquitoes. Foggers are either thermal (using heat to create a steam or smoke based fog) or cold (producing ultra fine droplets that form a mist spray). These foggers are used to apply insecticides to vegetation and other mosquito breeding areas to kill adult mosquitoes. The best time to fog is early morning or at dusk.

Liquid residual insecticides can also be used in a similar fashion to fogging except they are applied using a backpack or hand sprayer. The insecticide is applied to areas where mosquitoes rest such as foliage of bushes and shrubs, lower limbs of shaded trees, tall grass and other shady areas. These insecticides can also be applied to hard surfaces such as walls, fences, under pergolas, under decking, other shady structures, etc.

Larvicides are also effective in the control of mosquitoes. They work by killing mosquito larvae and pupae before they can emerge into biting adults. Liquid larvicide products are applied directly to water using sprayers. Tablet, pellet & granular formulations of larvicides are also available. Larvicides are used where mosquitoes lay eggs such as buckets and rain water tanks, fountains, gutters, non-chlorinated swimming pools, septic tanks, tyres.

Repellents prepared as lotions and aerosols give protection against mosquito bites for only a few hours. Electric zappers and mosquito coils which produce smoke are mainly used outdoors. Some natural materials such as citronella have short-term repellent effects.

Oil burners are available in a range of styles including bamboo and metal torches, table top burners, etc. Wax candles containing citronella oil are also a popular option. These repellents burn citronella oil which is a natural mosquito repellent. They are usually spaced around domestic backyards, resorts, swimming pools and outdoor entertaining areas to repel mosquitoes.

Mosquito repellent is an essential item in every Australian household particularly during the summer months. There are a number of effective mosquito repellents on the market including N,N-Diethyl-meta-toluamide (DEET), citronella, picaridin, etc. They are usually in the form of aerosols, gels or liquid sprays and are applied directly to the skin to repel mosquitoes and other biting insects.

Mosquito coils are insect repelling incense usually in the shape of a spiral. They often contain citronella and are burned to give off a smoke which repels the mosquitoes. These mosquito coils have been around for years and are common place in Australian households.

Mosquito bracelets are a relatively new development in repelling mosquitoes. They are usually worn on the wrist or ankle of the individual and contain natural botanicals to either repel mosquitoes or disguise the individual by masking the breath and scents given off by the body making it harder for the mosquito to find you. They reduce the need to apply standard insect repellents directly to the skin.

Portable repellent devices such as Thermacell units contain an insect repellent pad / tablet which is heated with butane gas. As the pad heats up the repellent is released into the area to create a mosquito free zone around the device. These also come in table top and camping options.

Mosquito Repellent Sandalwood Sticks are the only natural, chemical free, deterrent proven mosquito repellent on the market. The natural properties of sandalwood and its natural oils are what keep mosquitoes away and are 76% more effective then citronella candles. These are a natural mosquito repellent that are chemical free and safe around children and animals.