The Complete 'Do it yourself' Rat Control Kit

The Pest Defence Rat Bait Station is a robust, easy to use, low-profile bait station. Equipped with child tamper resistant locks, this compact box includes a fixed tray for loose bait, and a bar for securing bait blocks.

Pest Defence Rat Bait Station is an economical way to upgrade from using non-tamper-resistant rat bait stations to the security and high quality of tamper-resistance. It locks when closed and unlocks with a provided key.  Rats do not hesitate to enter and once they're inside, the station's interior baffles lead them to the mouse bait.

TRAPPER T-Rex Rat Trap is ideal for commercial and residential accounts, offering Pest Managers easy use on the job. Safer to use than other rat traps, TRAPPER T-REX Rat Trap sets easily by foot or hand. The same motion provides "no-touch" disposal of the captured mouse.

TRAPPER T-REX Rat Trap has multiple uses - placed alone or in pairs back-to-back along rat pathways, wired above ground to pipes or rafters, or placed inside Bell's rat-sized tamper-resistant bait stations. The TRAPPER Mini Rex Mouse Trap  is also available for trapping of mice. To improve the effectiveness of the TRAPPER T-REX Rat Trap in getting rid of rats it is recommended that an attractant such as TOMCAT Mouse Attractant Gel be used.

Along with outstanding rodent acceptance and control, Bell’s Contrac® Soft Bait comes with an extensive list of key attributes. The Soft Bait has a unique oil-based formulation with a precise balance between saturated and unsaturated fats. In addition, the manufacturing process ensures maximum contact of the paper sachet to the soft bait—further maximising bait acceptance. The Soft Bait is also designed to withstand almost any climate. When temperatures and humidity rise, Contrac® Soft Bait is both mould- and heat-resistant and, in cold climates, the bait won’t freeze.

Contrac® Soft Bait, a single-feed formulation, contains the second generation anticoagulant, bromadiolone. It is our most extensively researched and tested rodenticide which has undergone comprehensive field testing to ensure its performance in urban, rural, commercial and residential settings. 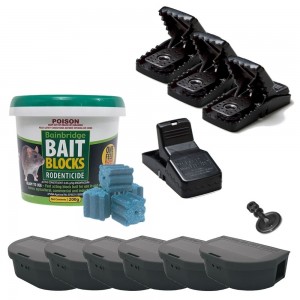