A Ringtail Possum Nest Box can offer a safe refuge for ringtail possums in urban and rural environments.

The addition of Spacers (2) is highly recommended for a Ringtail Possum Box, if it is to be affixed to a growing tree.

HOW TO MAKE A RINGTAIL POSSUM NEST BOX

The Ringtail Possum Box range has been developed so they are easily installed.

You can either install the Ringtail Possum Box yourself following the instructions below or have the box professionally installed. A range of business such as pest controllers, gardening companies or arboriculturist may be able to provide this service.

The equipment you will require to install a Ringtail Possum Box yourself includes:

Before installing the Ringtail Possum Box it is important to determine an appropriate location for the Ringtail Possum Box to be sited. A location protected from the hot north-westerly sun and prevailing wet winds is preferable. Ringtail possums will not will readily utilise a Ringtail Possum Box in an open location, they prefer denser vegetative cover. Certain species will utilise hollows at heights as low as two metres, however most hollow dependant fauna would prefer a minimum of four metres, though six to eight metres is likely to be even better.

CONGRATULATIONS!! Your Ringtail Possum Box has now been securely attached to the tree. Now sit back and eagerly anticipate the arrival of you new neighbours! 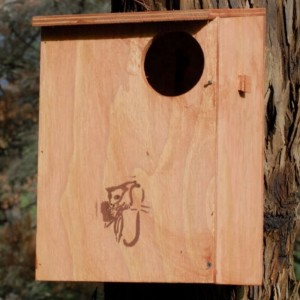