Nesting boxes can offer a safe refuge for small owls in urban and rural environments.

The Boobook is the most common owl found in Australia.  It is also the most wide spread, distributed across the country from Cape York to southern tip of Western Australia, except for the arid central western interior.   The Boobook can regularly be heard in cities and towns right across the country, particularly in the breeding season (August - December).   Like most other owls, the Boobook is a hollow nesting species, historically it has  mainly used natural hollows, however over the last few decades they have also started using owl nesting boxes.

Boobook's, like most other owls use hollows or nesting boxes for both rearing young during the breeding season and as diurnal roosts, outside of this period.  The typical species you may attract to the Small Owl Nesting Box include Boobook Owls, Brown Hawk-owls  (Christmas Is) and the Ruru (New Zealand). 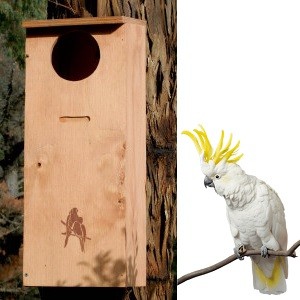