How to Get Rid Of Wasps

1. Wasps are day-flying insects. They can be controlled more easily and safely at night.
2. Identify the type of wasp. Is it European or Papernest?
3. Can you locate the nest?
4. Papernest wasps can be treated by the application of a specially designed wasp killer aerosol or the application of a permethrin based insecticidal dust directly to the nest. A liquid insecticide registered for control of wasps can also be applied to nests.
5. European wasps can be treated using an insecicidal dust such as permethrin dust and applying directly to the nest.
6. Wasp traps can also be used to lure and catch European wasps.

The European Wasp was introduced into Australia apparently during the latter half of the twentieth century and is now a pest in most Australian states. This has also occurred in New Zealand where it attacks weak hives of honey bees affecting honey production. This is also expected to occur in some parts of Australia as it spreads northwards and westwards. Unlike honey bees, European waps can sting many times when disturbed, particularly if this occurs in or near their nest. Their stings, particularly those from a whole swarm, can require medical attention.

The English wasp has been present only in Victoria for some years and is very similar in appearance to the European wasp. It is therefore important to have wasps identified before control measures are applied.

The workers of the European wasp in the colony are sterile females and measure 12-15mm, with full wings which cover their bodies. They are black with horizontal yellow bands in appearance. The queens and males are larger than the workers, being about 20 mm long.

Recognition of the nest is important. They are made in the ground often near an old tree stump, in rockeries and landscape garden material. They have also made nests in roof cavities and walls from which they continuously leave to collect food.

To obtain their basic food needs of protein and carbohydrate, the wasps seek food from flowers and fruit, and also prey on many insects such as flies and honey bees. A single female wasp establishes hr colony in a selected location and soon commences to lay eggs.

In a developing colony the larvae, which are fed by the queen, pupate then emerge as adults which take over the duties of the colony, including the feeding of the young. At the end of a summer a nest can contain over 10000 individuals. The nests can vary in size from 15cm to over 4 metres. At the height of their development they may contain over 4 million cells and over 100000 workers.

The services of a pest control technician are recommended as being the safest and most effective means for the control of European Wasps.

Control measures are best carried out at night, because the wasps remain in the nest. The nest can be covered with plastic sheeting and the insecticide introduced. In this way the wasps cannot leave the colony reducing the possibility of the operator being stung. However, it is important that body and facial protection is used when controlling wasps.

Isolate and destroy the nest using a pesticide registered for this use. Dusts are effective in controlling the wasps in their nest. An aerosol is also effective. The nest can then be removed and destroyed in case any wasps have survived the treatment. 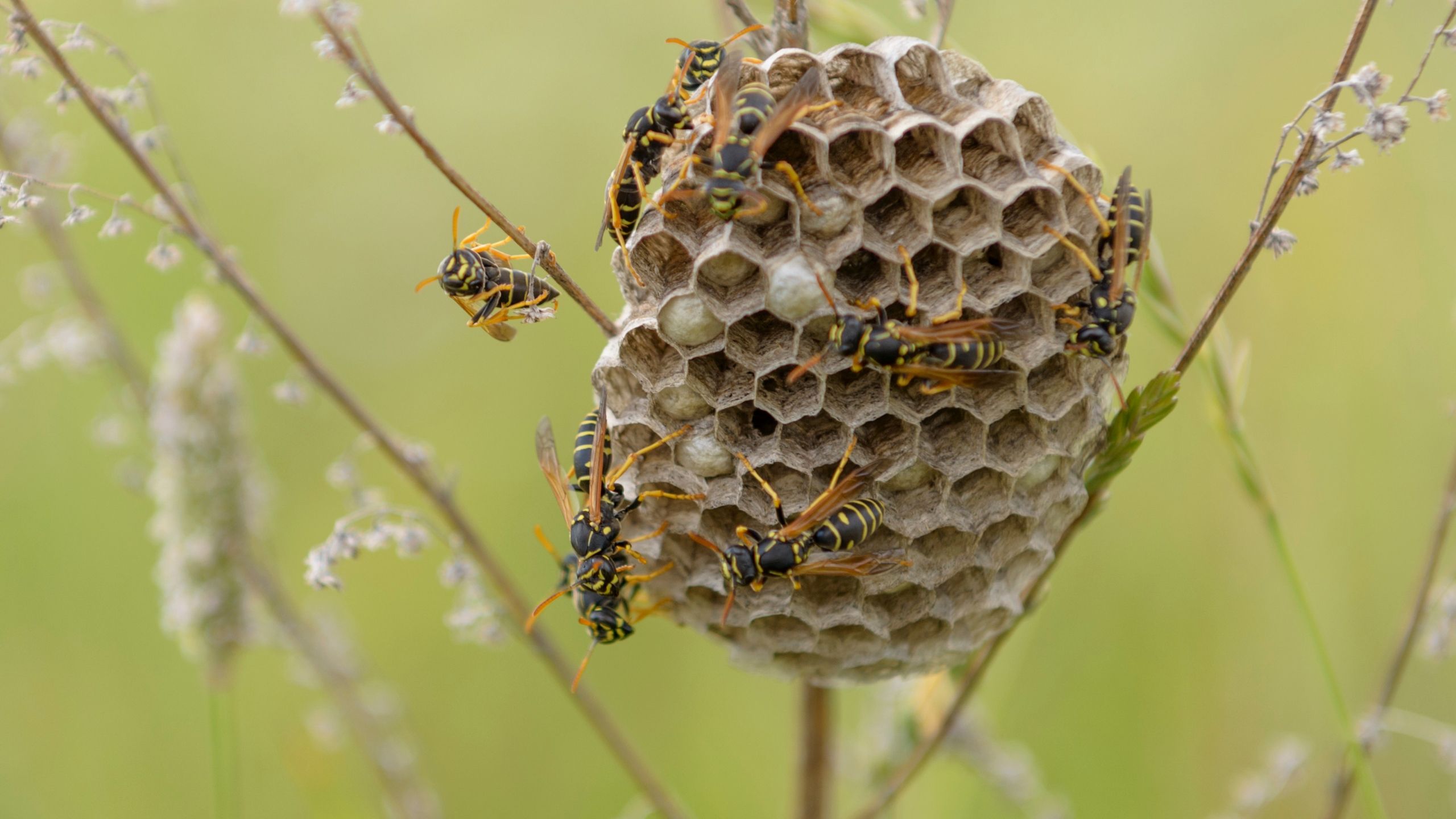 Papernest wasp are social insects with female, male and worker castes living in a papery nest, which is often found under the eaves of a house attached to the surface by a small strong stalk. The adults prey on other insects, but if disturbed can sting several times.

If the nest of papernest wasps is to be removed it is safest to do so at night. Cover the nest with plastic, and then cut the stalk attachment.