Wild dogs are a 'declared pest animal' under the Local Land Services Act 2013 and are defined as: 'any dog, including a dingo, that is, or has become wild, but excludes any dog kept in accordance with the Companion Animals Act 1998, the Exhibited Animals Protection Act 1986, or the Animal Research Act 1985 or any legislation made in replacement of any of those Acts'.

The primary goal of wild dog control is to reduce livestock losses. Wild dogs may have large home ranges that include a number of land holdings. Therefore it is important for land managers to approach wild dog problems as a group. A general aim of reducing wild dog numbers might not reduce their impact because a few individual dogs may be causing most of the damage.

The aim of wild dog control should be to minimise the likelihood of wild dogs interacting with domestic livestock.

Wild dogs often use well known paths to travel around their territory so the best place to set a trap is either on or near a regular dog path. Wild dogs scent mark these paths with urine, so trappers may use trained dogs to identify fresh wild dog sign and place their traps. Wild dogs may be attracted to the trap location by using a lure. Research has shown that the most attractive lures for wild dogs contain dog urine. Manufactured lures, including FeralMone™ SFE have been developed to attract wild dogs and foxes.

Setting traps around old animal carcases or with food lures is not recommended because it tends to attract other nontarget species such as quolls, goannas or birds.

Traps should be visited at least once each day. It is preferable to set traps at the end of each day and check them in the morning. 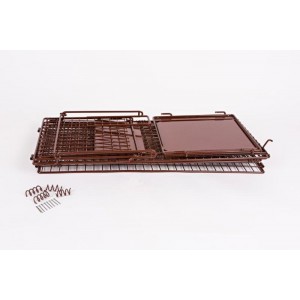